There’s a dilemma that many of us face at some point in our lives: whether or not to tell a friend that his beloved is cheating on him.

On the one hand, it seems like the right thing to do – after all, your friend deserves to know the truth.

On the other hand, you may be worried about how your friend will react and whether or not he will forgive you for telling him. In this article, we will explore both sides of this debate and help you decide best for you and your friend. 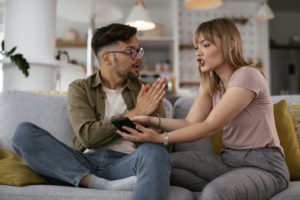 Proof #1 – He Deserves to Know the Truth

If you care about your friend, you should tell him the truth about his beloved cheating on him. It’s better for him to know the truth than to be kept in the dark and continue to be deceived. He deserves to know what’s going on to make an informed decision about what to do next.

Proof #2 – Things Will Be Worse in the Long Run

Hiding the truth from your friend will only worsen things in the long run. He’ll eventually find out and feel betrayed that you didn’t tell him sooner. It’s not fair to keep this information from him, especially if it will significantly impact his relationship. The sooner he knows, the better off he’ll be.

Proof #3 – You Have Nothing to Gain by Lying

If you’re worried about your friend getting hurt, remember that you have nothing to gain by lying. In fact, if he finds out that you knew and didn’t tell him, he’ll be hurt even more. So hiding the truth from your friend will only worsen things in the end. So if you’re thinking about whether or not to tell him the truth, remember that honesty is always the best policy.

You don’t know what led to the affair. Maybe they had a fight, and she was feeling neglected. Perhaps he was working too much, and she felt like she was never a priority. There may be extenuating circumstances that you don’t know about.

Hearing that his beloved is cheating on him will likely make your friend feel worse about the situation. He’ll blame himself and think it’s all his fault.

If you tell your friend his beloved is cheating on him, he may not believe you. In fact, he may think you’re just trying to break them up and end your friendship with him. However, you don’t want to risk losing your friend over something like this, so it’s best to keep quiet.

Harsh realities have a way of revealing themselves eventually. If his relationship is meant to survive, the truth will come out one way or another – without you having to say anything. And if it doesn’t survive, then maybe it wasn’t meant to be.

If you think about it, you will be opening up old wounds by telling your friend the truth. Your friend may have forgiven his beloved for cheating in the past, and you bringing it up again, it will only hurt him more. It’s best to leave the past in the past and not bring up old hurtful memories.

If you’re not 100% certain that your friend’s beloved is cheating on him, it’s better to stay on the side of caution and not say anything.

Ultimately, it’s up to you to decide whether or not to tell your friend the truth about his beloved cheating on him.

First, consider how close you are with your friend, how he would react if he found out you knew about the affair and didn’t tell him, and what kind of relationship he has with his beloved.

If you think telling him would do more harm than good, it’s probably best to keep quiet. But if you’re confident that he can handle the truth and that it won’t destroy your friendship, go ahead and tell him what you know.